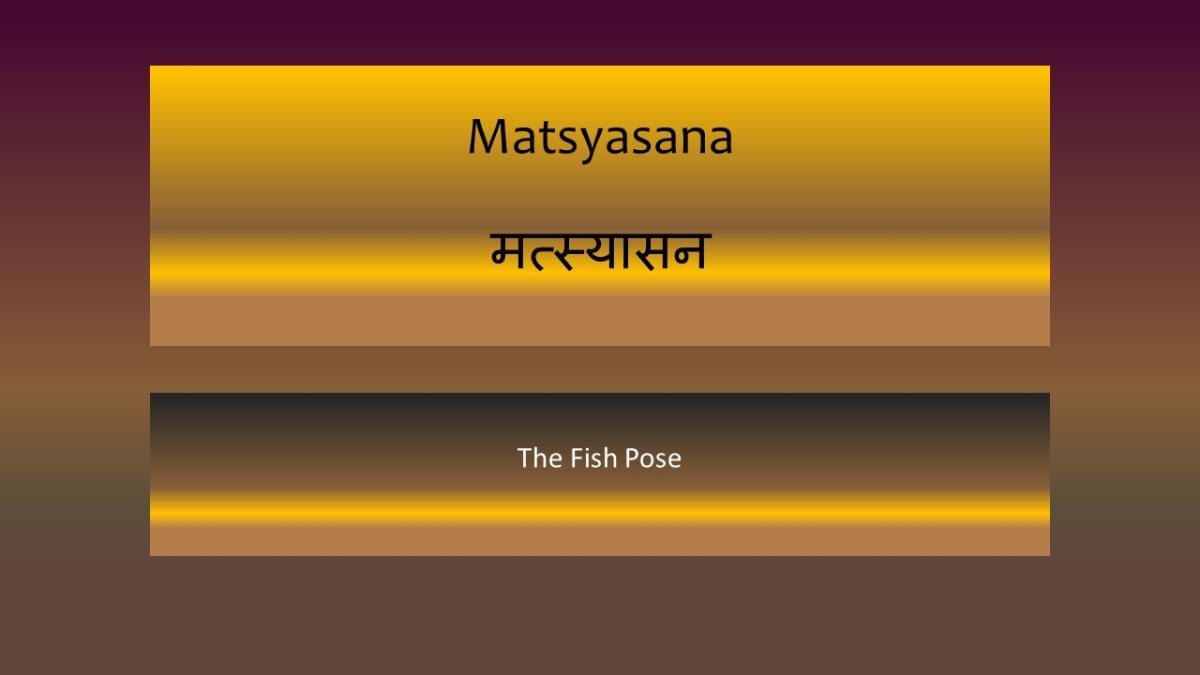 Matsyasana is a reclined backward bending yoga posture with or without positioning the legs in Lotus Posture. It is one of the yoga postures of medieval times and yet a popular posture of modern yoga.

This posture is found mentioned in Hatha Yoga Pradipika and described by Gheranda Samhita.

Matsyasana is one of the counter-poses or follow up poses for Shoulder Stand.

The Sanskrit word Matsya means fish. Therefore we call this pose in English as Fish Pose.

When performed this posture resembles a fish. The cross-legged knees look like the tails of a Fish. Besides this, the curved torso resembles the body of the fish.

Matsyasana (Fish Pose) differs from Matsyendrasana (Lord of the Fishes Pose). The terms are often confused with. The Fish Pose is a reclined back bending Pose; whereas the Lord of Fishes Poses is a seated spinal twist.

The fish pose is not meant for pregnant ladies. Moreover, one who has the following issues should not attempt this practice.

One must go for the practice of the following poses as the preparatory poses.

Sit in Lotus Posture. Have a couple of slow and deep breath.

Bend slowly backward and lie on the floor without releasing Lotus Posture. Support your body with your forearms and elbows while bending backward.

Lift the chest a little upward. Turn the crown of the head towards the floor. Make an arch of the back to the maximum comfortable extent.

Hold on the big toes with elbows touching the floor. Now the body is supported by the legs, buttocks, and head.

Breathe slowly. Keep the position as long as it is comfortable.

To release the position, bring down the back to the floor and straighten the head. Come back to sitting posture by placing the palms on the floor. Release the Lotus Posture.

Repeat the Step 1 to Step 6 with the legs crossed on the opposite side in Lotus Posture.

The initial duration maybe 30 seconds to two minutes. However, one may extend the duration to four to five minutes.

But in cases where a forwarding bending posture is not performed before this pose, one should perform the following poses.

In modern yoga practice, Matsyasana is performed in more than two variations.

There is an important variation in Fish Pose wherein the posture is performed without Lotus Posture. In this variation, the legs and arms are placed on the floor. It is an easier version and still provides most of the benefits of the full version.

In other variations with Lotus Posture, the only hand position is altered. Instead of holding the big toes, hands are put in Anjali Mudra.

The benefits of Matsyasana are as follows.

Good for Constipation, Indigestion, and Piles

It stretches the abdomen organs and muscles. As a result, it removes constipation, indigestion, and other stomach disorders. It controls piles also.

Improves the functions of Pelvic Region

Blood circulation to the lower part of the body gets reduced. In consequence, the functions of the organs of the Pelvic region and stomach get improved. It nourishes the reproductive organs. This pose is an excellent remedy for back pain.

Good for Asthma and Bronchitis

It tones up the muscles of the Lungs and hence improves the function and drives out respiratory disorders like Asthma and Bronchitis.

The Fish Pose gives a good stretch to the Cervical Region. As a result of this, Cervical Spondylitis. It boosts the functions of the Thyroid and Thymus glands. Thus improves immunity.

Improves disorders of menopause and periods

The regular practice of this posture helps in conditions like disorders of menopause and periods.