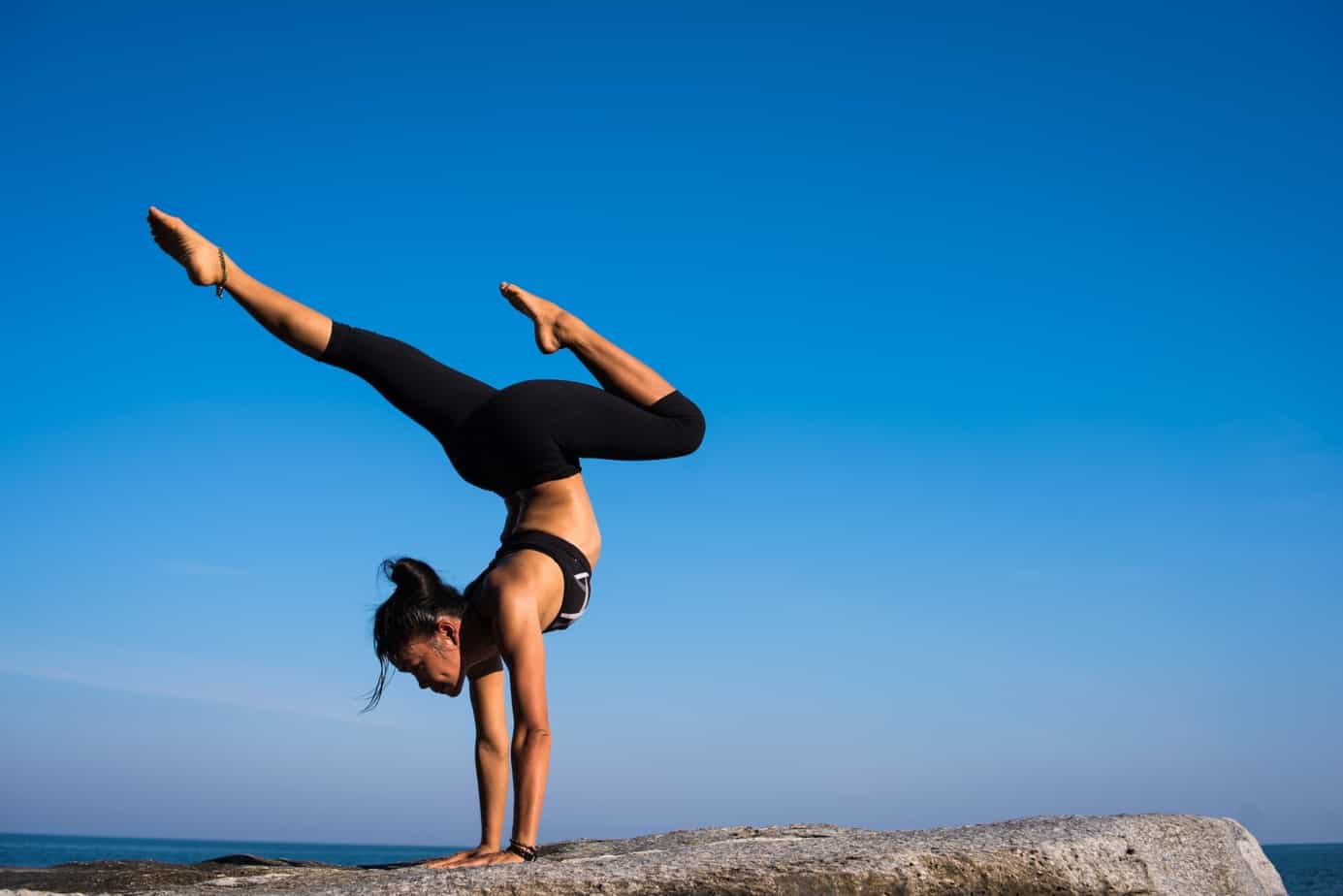 Hatha Yoga is a ladder that leads to Raja Yoga. It is the branch of yoga that deals with the preparation of the body to the higher levels of yoga. Obviously, it is the very basic yoga that one needs to begin with. The modern-day yoga poses belong to this branch of yoga only. Today, the term yoga simply refers to yoga poses of this kind.

For the purpose of Raja Yoga alone, Hath Yoga is being taught.

Let us have a look into its history, meaning, and benefits along with its flow and sequence.

We may simply define it as the branch of yoga that yields the fruit of Raja yoga. In the words of Hatha Yoga Pradipika, it is the ladder or staircase that leads the aspirant to the high pinnacled Raja Yoga.

At the same time, we could not rule out its existence in some other form of yoga or tradition, for example, Tantra. Hatha Yoga was a part of Tantra. According to the documented history, Tantra had been at its peak of practice during the fifth to ninth century AD. The concepts like Chakras, Nadis, and Kundalini are discussed in tantric texts that belong to the said period.

To understand the history of Hatha Yoga, let us have a look into the hatha yoga texts of the earliest period, the medieval period, and the modern period.

The tenth-century Vaishnavite text Vimanacharakalpha describes some non-meditative yoga poses like Peacock Pose. However, this is not a yoga text.

During this period, the yoga lineage of Nath flourished. Sage Matsyendernath and Goraknath were the pioneers of this yoga lineage. Goraknath authored many texts on Hinduism and yoga. Vivekamarthanda and Gorakshasataka are important texts on Hatha Yoga.

Vasista Samhita, a yoga text of the thirteenth century describes the yoga of meditation with eight parts of Raja Yoga. Vasista Samhita is the yoga text that describes the techniques for the purification of Nadis and non-seated yoga poses like Kukutasana. Though it is a text on Raja Yoga in principle, it incorporated many aspects of Hatha Yoga. Vasista Samhita influenced many yoga texts of the medieval period. Hence during this period (12th and 13th Century AD), Hatha has become a part of mainstream Raja Yoga apart from Nath lineage.

During this period, Hatha has become a separate branch of yoga. Separate yoga texts like Gheranda Samhita, Hatha Yoga Pradipika, Hatha Tattva Kaumudi, Siva Samhita had been created. It is in this period, it had become more popular.

Many approaches to yoga are in pursuit of the benefits. Comparing the results, yoga offers more benefits than any other exercise. We may broadly classify the benefits of yoga into three categories.

For maintaining the health and wellness of both diseased and healthy individuals, yoga is as effective as any physical exercise or more effective than that. In other words, the intervention of yoga is equal or superior to exercise on many measurable outcomes. Several medical studies observe a feasible intervention and beneficial effects of yoga on many grounds. Yoga practice helps

Several studies indicate that yoga has a positive physiological benefit on the respiratory system. It improves pulmonary function, cardio-respiratory endurance, and breath-holding time. Yoga, when practiced by patients with Chronic Pulmonary Obstructive Disease, results in the improvement of lung function and quality of life. It decreases dyspnea-related stress and improves diffusion capacity. Moreover, it reduces the respiratory rate.

Yoga improves the functions of the heart, arteries, and veins. It reduces the heart rate and systolic blood pressure. Several studies show that yoga practice reduces the main factors of cardiac diseases like total cholesterol, LDL, and VLDL.

Yoga practice retards the progression of atherosclerosis. As a result, it helps to lower the risk in patients with severe CAD (Coronary Artery Disease). Furthermore, yoga practice helps in the regression of coronary lesions and improves myocardial perfusion.

Yoga addresses the other factors of cardiac diseases like obesity, stress, nervous system imbalance. This, in turn, helps one to have better heart health.

Yoga offers several postures for health conditions like bloating, indigestion, diarrhea, and constipation. Moreover, it regulates the functions of the bowel.

Practicing yoga in conjunction with medications can be helpful in controlling and/or alleviation of symptoms related to digestive diseases.

Can yoga be used to treat gastroesophageal reflux disease?

As we already know, yoga activates the parasympathetic nervous system. This activates the cranial and sacral nerves. In turn, cranial nerves stimulate the activity of the stomach, gallbladder, and intestines. Hence, yoga boosts the functions of the stomach.

The following poses improve the functions of the digestive system.

As concluded by the pilot study authored by Maja PetriÄ, et al, in 2014, Improved body flexibility is one of the most obvious and quickly achieved effects of regular hatha yoga practice. The results of this study confirm that the regular practice of yoga has a significant effect on body flexibility in young healthy women, which is particularly obvious in measurements of the increase of the flexibility of skeletal muscles.

Furthermore, yoga practice strengthens the joints and makes the skeletal system disease-free. The overall health and well-being of an individual depend much on the health of the spine. Yoga practice helps to have a healthy spine and contributes to overall health.

Several medical studies observed a drop in the levels of cortisol and adrenaline in the yoga group. Bow Pose and Wheel Pose improves the functions of the adrenaline gland and its secretion.

Similarly, Palm Tree Pose stimulates the growth hormones and directly influences the height of a growing individual. Plough Pose, Fish Pose, and Camel Pose help to have good thyroid health. Likewise, Head Stand, Shoulder Stand, Hero Pose, and Reclined Bound Angle Pose are beneficial to gonads. As a result, it regulates the functions of the testes and ovaries.

The practice of yoga improves the parasympathetic tone that promotes and regulates the salivary glands and pancreas. Moreover, yoga is effective in improving the quality of life in patients having health conditions like chronic pancreatitis.

Yoga improves blood supply to the breast and keeps the mammary glands healthy. Regular practice keeps the diseases like breast cancer at bay.

In yet another study, IgG levels of the yoga practitioners were tested before and after a three times a week yoga program. The results show an increase in the level of IgG level. It means they are less likely to develop an infection.

Hatha Yoga is found to be a safe and effective adjuvant therapy in treating persons with Chronic Kidney Disease. It improves the renal functions and Quality Of Life in them. Moreover, it reduces the need for dialysis. In End-Stage Renal Disease Patients, it considerably reduces oxidative stress which shows therapeutic, preventive, and protective effects for them.

Mental health is a precursor to the overall health of an individual. Many studies found its impact on the Autonomic Nervous System. It effectively handles the fight or flight response. In turn, it helps to handle stress, anxiety, and depression. Hence, yoga helps to prevent these conditions and their subsequent development into psychosomatic diseases.

Spiritual benefits are the primary benefits of yoga. In other words, the very approach of yoga is for these benefits only. Hatha Yoga prepares one for the successful journey of Raja Yoga. We may list the spiritual benefits below.