Padmasana is a yoga posture that aids in the practice of meditation. It is one of the most popular, most ancient, and most performed yoga practices. Lotus Posture is taught as the Primary yoga posture before learning any other posture in ancient times. Now it is one of the advanced group of postures.

This guide on Padmasana discusses its meaning, steps, benefits, and many other aspects of it in a comprehensive manner.

The Sanskrit word Padma means the lotus. Hence, its English translation is Lotus Posture. The posture is called as such because it resembles the Lotus flower. Kamalasana is the alternative name in Sanskrit.

The second century CE statues and images of Buddha and Mahavira in Padmasana shows that the Asana was prevalent at that time.

Yoga Yajnavalkya which is one of the earliest yoga texts, compiled well before second Century CE describes the steps for Lotus Posture.

Maharishi Vyasa’s commentary on Yoga Sutra also talks about Lotus Posture. This commentary is believed to be of the same period.

A figure seated in Lotus Pose is found in the coin that belongs to the period of Chandragupta II (380 CE to 415 CE).

From this evidence, we can conclude that Padmasana was in practice well before 2000 years from now.

The performance of lotus pose is possible only when one has the flexibility of hip joints and knee joints. Those who are having the following issues should avoid attempting this posture or perform under a competent yoga supervisor.

As we have already seen, the flexibility of hips and knees are the prerequisites for getting mastery over the lotus posture. To open the hips, one should resort to the following yoga poses and practices.

Sit on the floor with your legs stretched.

Then, bend one leg, say the left leg,  and place the foot on the other thigh in such a way that sole is placed as near to the pelvic bone as possible.

Similarly, bend the other leg and place the foot similarly as in the previous step. Head and spine should be erect and be in a straight line and both your right and left knees should touch the ground.

Place the hands on the knees in Jnana Mudra or Chin Mudra. Then, close the eyes and place the mind in between the eyebrows. Keep your breathing as slow as possible.

For a beginner, it is not possible to retain the posture for more than one or two minutes. Slowly the duration may be increased to three hours or more. The aspirant achieves mastery only when he is capable of retaining the posture for more than three hours. Once reached this milestone, it will be easier for him to proceed to the higher levels of yoga

Immediately after performing Lotus Pose, one should resort to any one of the following postures.

The consistent practice of Padmasana provides the following benefits.

The therapeutic benefits of Lotus Pose include both physical and psychological benefits.

The following yoga postures belong to the group of Lotus posture.

Padmasana in Other Asanas

Apart from the variations of Lotus posture, this posture is combined in other yoga postures also.

The earliest mention of Lotus Posture was in Yoga Sutra commentary by Maharishi Vyasa. Yoga Yajnavalkya also mentions about Padmasana.

According to Yoga Yajnavalkya, Lotus Posture is placing both the legs on opposite thighs and holding the big toes by the hands from behind.

Verse 559 of Thirumanthiram by Thirumoolar provides the steps to do the lotus posture.

The text says “In Sukhasana (easy pose), take your foot and place it on the opposite thigh in such way that your left leg on the right thigh and right leg on the left thigh and place your hands on them showing your palms up. This is known as Lotus Pose”.

Verses 1.44 to 1.49 of Hatha Yoga Pradipika describe Lotus Posture, its importance, and benefits.

Place the right foot on the left thigh and left on the right one and hold firmly the toes by the crossed hands from behind. Press the chin on the chest and look at the tip of the nose. This is the Lotus Posture that destroys all diseases. (Verse 44).

Place the feet on the thighs soles facing up and place the hands on the groin with palms facing up. (Variation). Look at the tip of the nose. Keep pressing the tongue against the root of the upper teeth. Keep the chin firmly on the chest and raise the Vayu upwards. (Verses 45-46).

This lotus pose destroys all diseases. It is not easy for all to master. Only the intelligent attains it. (Verse 47).

Sit in Lotus Posture. Place the one palm on the other. Press the chin on the chest. Meditate on Him (The Supreme Entity). Draw Apana up and bring Prana down. Repeat again and again. This way one awakens Kundalini and attains the highest wisdom. (Verse 48).

The Yogi seated in Lotus Pose who controls the Vayu by inhaling and filling attains liberation without any doubt. (Verse 49).

According to Verse 3.20, the yogi should go to a remote place or a cell, assume Lotus Pose on the seat, and begin Pranayama practice.

I give the details of the Lotus Posture that destroys all diseases. By crossing the legs, place the feet on the opposite thighs. Cross the hands and place them similarly (facing upwards) on the thighs. Fix the sight on the tip of the nose. Press the tongue against the root of the (upper) teeth. Draw in the air slowly to the maximum possible capacity and exhale it slowly in a rhythmic stream. (Verse 3.88).

It is not possible for everyone. Only the intelligent one gets mastery over it. (Verse 3.89).

By assuming this practice, the vital airs of the practitioner at once gets the stable equilibrium without any doubt and the airs flow harmoniously through the body. (Verse 3.90).

Gheranda Samhita gives the procedure to perform Lotus Pose as below.

Place left foot on the right thigh and left one on the right thigh. Cross the hands behind the back and catch hold of the big toes. Place the chin on the chest and gaze on the tip of the nose. This is lotus pose that destroys all ailments. (Verse 2.8).

It is to be noted here that most of the ancient Yoga texts including Yoga Yajnavalkya give steps involved in Baddha Padmasana or Bound Lotus Pose for Lotus Pose. 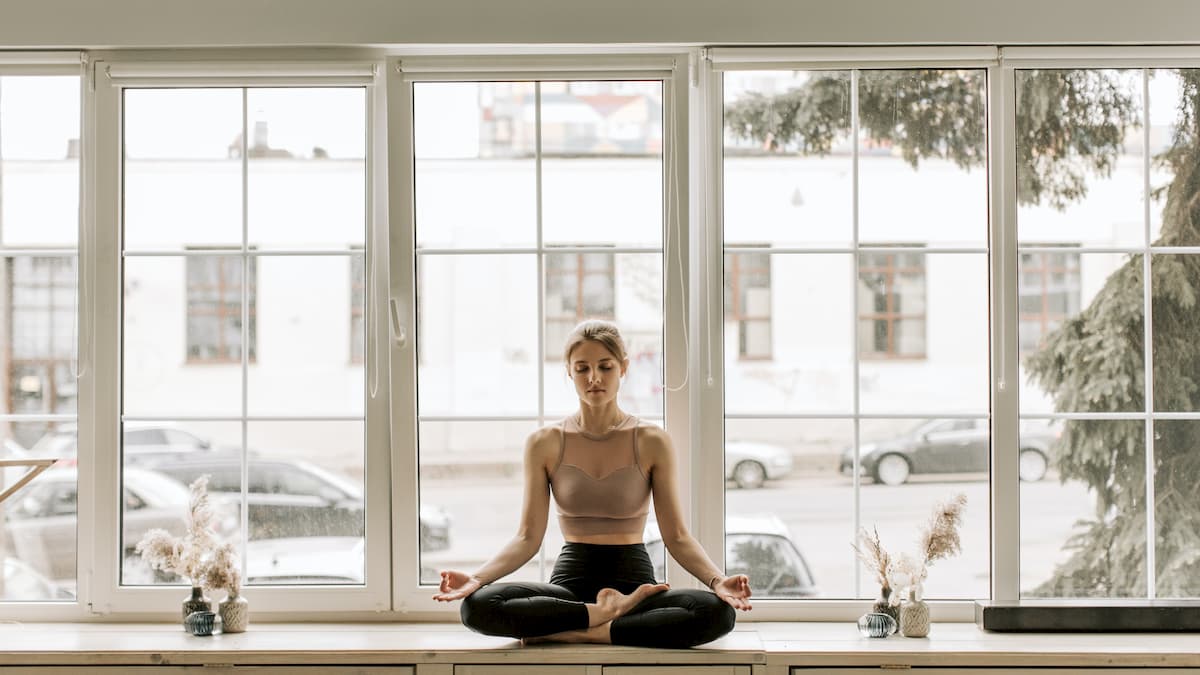 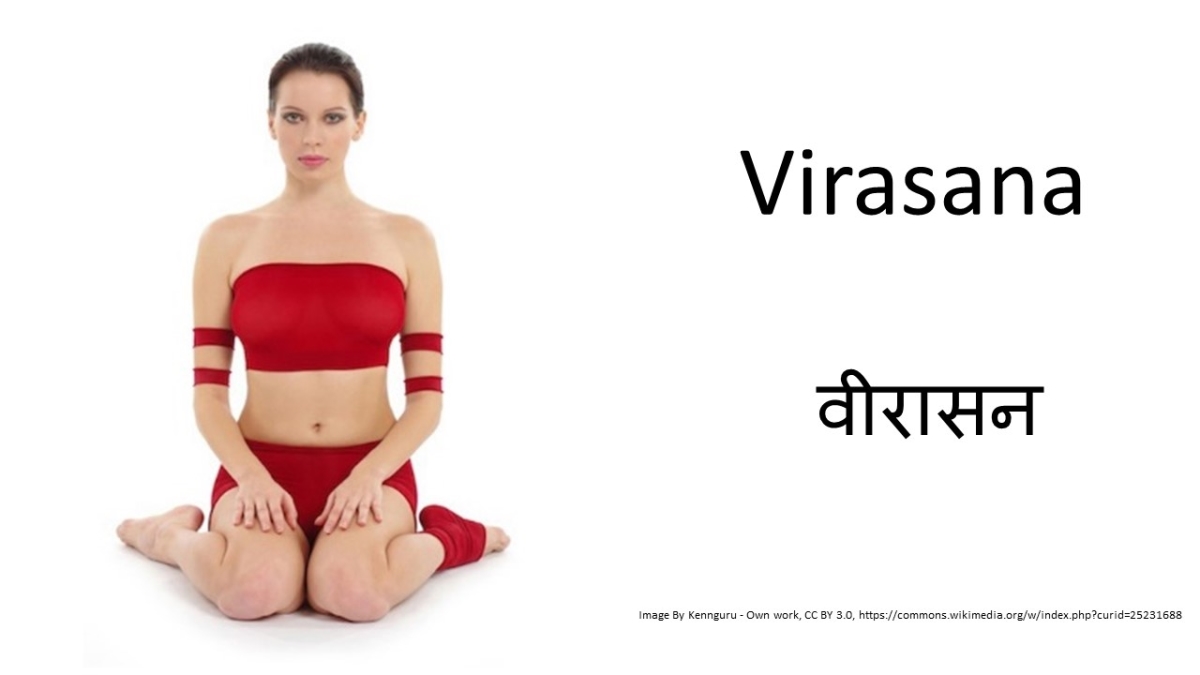