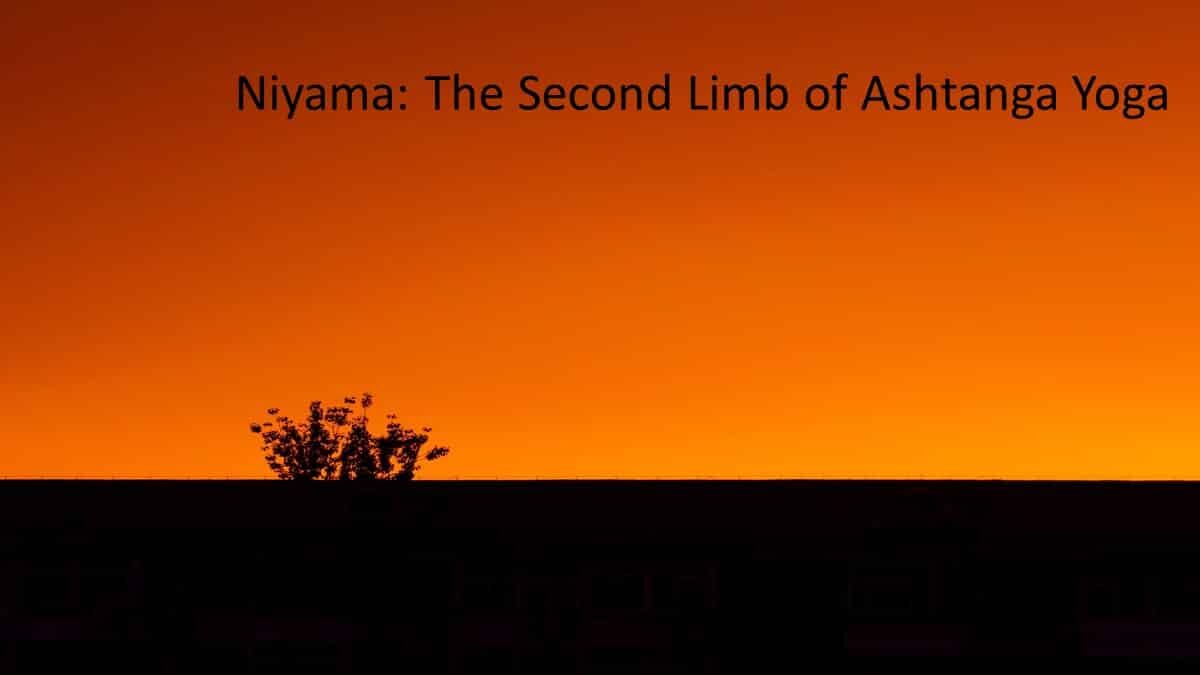 Thirunavukkarasu Sivasubramaniam May 24, 2019 no Comments

Niyama is the ethical code of conduct to be observed during the course of yoga. Simply put, Niyamas are “dos” in yoga; whereas Yamas are “don’ts”. In other words, Niyamas are moral observances. These observances help one to get mastery over the mind and thereby one could avoid distraction. They prepare the aspirant for the further stages in Yoga.

The Sanskrit word Niyama is derived from the root ‘Niyam’ which means ‘to hold’. Hence the etymological meaning of Niyama is ‘holding back’. It indicates the observance of ethical restraints.

The core objective of Yama is the obligation towards society. They might have been framed with the objective of maintaining harmony in society. They help maintain the cosmic order. For instance, practicing Ahimsa maintains harmony with fellow humans and other beings. In other words, the practice of Yama ensures external harmony; whereas the observance of Niyama ensures internal harmony.

Niyama in Yoga Sutra of Patanjali

According to the Yoga Sutra of Patanjali, there are five important observances to be cultivated for the attainment of progress in Yoga. Cleanliness, Contentment, Penance, Study of Scriptures, and Complete surrender to God are the five codes of observances.

Tri Sikhi Brahmana Upanishad defines Niyama as “the continuous attachment towards the ultimate truth”. It gives a ten-fold Niyama. Penance, Contentment, Belief in the existence of the Supreme Being, Munificence, God worship, Study of scriptures, Modesty, determination,  Mantra chanting, and austerity are the ten-fold Niyamas.

Mandala Brahmana Upanishad prescribes a nine-fold Niyama. Devotion to Guru, commitment to the path of truth, the experience of the existential reality, fulfillment in that experience, solitude, remote residence, mastery over the mind, non-bothering of the results of anything, stubbornness in dispassion are the none-fold Niyama.

Darshana Upanishad and Varaha Upanishad give the same list as given in Shamdilya Upanishad. Yajnavaljya Samhita and Hatha Yoga Pradipika also describe the same list of Niyama; whereas Bhagavata Purana adds hospitality as the eleventh Niyama to the list.

As we have already seen, Sage Patanjali gives a list of five codes and most of the other scriptures give a list of ten. Let us see each of them in brief.

Through cleanliness, the yogi overcomes attachment to the body and bodily intimacies.

Santosa means contentment. One is said to be in Santosa when he is happy with what has.

Tapas is training or taming the senses by strict austerities.

Svadhyaya is the study of scriptures. It is often translated by modern scholars as self-study. Of course, the core teaching of scriptures is Self-study. Swami Vivekananda translates this as the repetition of Mantras.

Ishvara Pranidhana is leaving everything to God. It is transferring the ownership of thoughts, speech, and deeds to God. It is the complete surrender.

In addition to Patanjali’s five ethical codes, Other Upanishads give an extended list. Let us see them in brief.

Dhana means charity. It is giving away of pecuniary things earned by righteous means to people who follow the path of scriptures.

Hree is the modesty or shyness felt while doing the act prohibited by scriptures and the world. One should feel shy in doing such acts and always avoid them doing it.

Mathi is a firm and committed belief in things enjoined to scriptures. It is adherence to scriptures, its guidelines, and injunctions. One should not deviate from those guidelines even when instructed by his Guru.

Japa is the repetition of a Mantra. Rules for Japa are given in scriptures which should be strictly followed.

How do these ethical codes help in Yoga?

By cleanliness, the purification of mind, cheerfulness, focus, control of senses, and Self-realization is gained. Thereby fitness to yoga is attained.

Observing Tapas, one gains mastery over the body and mind. It gives control over the senses. Sometimes, the yogi gains some extra-sensory perceptions like hearing distant sounds.

By repetition of mantras, one sees the intended deity. By complete surrender to God, one attains Samadhi.

According to Buddhism, things happen subject to five orders or natural laws called Pancha Niyamas. They are listed below.

Utu Niyama is the cosmic order that governs the seasons, climate, weather, floods, earthquakes, and other natural activities. Karma cannot influence this natural order.  In other words, Utu Niyama supersedes Kamma Niyama which is the order of cause and effect. Buddhists view that Karma is not the cause of Natural disorders.

Bija in Sanskrit means seed. Bija Niyama is the natural order that governs seeds, sprouts, fruits, and the genetics that applies to animals and other beings.

Karma in Sanskrit means an act. Kamma is the equivalent word in Pali. Kamma Niyama is the natural order of moral causation. Every act of thought, words, and deeds produces a certain effect on the doer. For instance, if a doer has a harmful intent, it will reflect on him back with the same force and manner in which it was intended by him. One should skilfully avoid the ill effects by disciplined thoughts, words, and deeds.

Dhamma Niyama is the natural order of duties or disciplines. Dhamma in Pali or Dharma in Sanskrit means duties or doctrines. Here, it refers to the Buddhist doctrines such as Annata, Sunyata, and the like.

Chitta in Sanskrit means mind. Chitta Niyama is the order of the activities of the mind like thoughts, perceptions, consciousness, and the like.