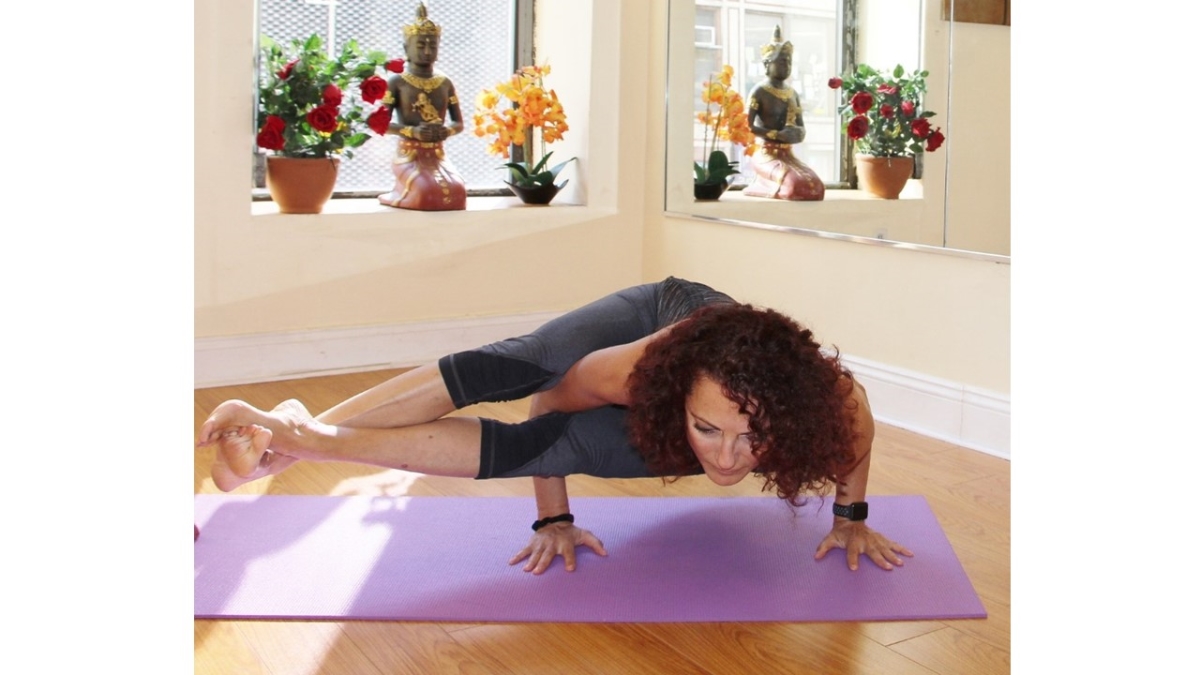 Astavakrasana is an advanced-level yoga exercise that belongs to the Arm Balancing category. Medieval yoga texts did not mention this posture and hence some people are of the view that it was probably not in practice during that period. It appears first in the Gymnastic text called Vyayama Dipika in 1896.

Therefore some researchers are of the view that it would have come into practice during the late ninetieth century. At the same time, one could not deny the other possibility that it would have been in practice in some yoga lineages from time immemorial.

However, I go with the latter view, because many yoga texts claim that there are as many postures as the number of species and the texts did not explicitly mention every one of the poses. Yet, many postures though not mentioned, have been prevalent in some yoga lineages. Hence it is not correct to conclude as true that a posture was not there solely because yoga texts did not mention it.

In Sanskrit, it is asta+vakra+asana. It means eight+bend+pose. So literally it is a posture of eight bends or Angles. Therefore some people call Eight Angles Pose in English.

In fact, this posture is named after sage Astavakra, an ancient Indian sage. So, calling it Sage Astavakra Pose is more appropriate than calling it Eight Angle Pose.

You might have heard the story of Sage Uddalaka Aruni and Svetaketu narrated in Chandogya Upanishad of Sama Veda. Aruni had a daughter who was also a student named Sujatha. Kahoda was one among the students of Aruni.

Sujatha and Kahoda got married. When she was pregnant, the fetus heard his father reciting a mantra with incorrect intonation during a discourse to his disciples. The fetus from the womb told him to correct the eight errors of intonation. Having been humiliated before his disciples, Kahoda became angry and in turn, he cursed the fetus to be born with eight deformities.

At the request of Sujatha, Kahoda went to the palace of King Janaka for earning money. King Janaka was performing a Yanjna. In there, Bandhi defeated Kahoda in the argument. As a punishment, Kahoda was drowned in the water.

Meanwhile, Sujatha gave birth to a child with deformities. Because of the eight deformities, he got the name Astavakra that means the one with eight deformities. On reaching the age of ten, Astavakra came to know about the destiny that happened to his father. He went to the Palace of Janaka and defeated Bandhi in an argument and asked to punish him with drowning.

Bandhi told that he was the son of Varuna, the deity of water and Kahoda was not dead. For performing a Yajna, Varuna needed seven Brahmins, Kahoda was sent to him for the performance of Yajna along with other defeated Brahmins.

Bandhi, on being defeated, wanted to go back to his father Varuna. Meantime Kahoda and other Brahmins were released. On his father’s advice, Astavakra immersed himself in the river Samanga and came up with his deformities cured. This is the story of Astavakra as found in Mahabharata.

Furthermore, Astavakra is ascribed to the text of Astavakra Gita.

This posture is not for pregnant ladies.

One should prepare himself with arm balancing poses.

Stand with feet apart. Lean forward, place the palms on the floor. The left palm should be on the floor just before the left leg; whereas place the right palm before the halfway mark between the two legs.

Bring the right leg over the right arm and place the right thigh on the upper right arm just above the right elbow. Initially let the feet touch the floor for balancing

Bring the left leg in between the arms and as closer to the right leg as possible.

Raise the legs. Interlock the feet by placing the left foot over the right ankle. Stretch the legs straight on the right side. Now the right arm is in between the legs and the weight of the body is on the arms. Adjust the position so that the head and trunk are parallel to the floor by bending the arms suitably.

Breathe Normally. Keep the position as long as it is comfortable.

Repeat the steps with legs stretched on the other side for the same duration of time.

The initial duration may be ten to fifteen seconds and one can increase the duration to two/three minutes according.

After doing this posture, one should resort to the practice of Corpse Pose for a couple of minutes.