There are more than ten Mahavakyas found in Vedanta. Four of them are considered as important and the spiritual scholars, Sri Adi Sankara and Sri Ramanuja discussed them in a great deal.

The Sanskrit term ‘Mahavakya’ means a great sentence or aphorism that describes the core teachings of Vedanta. The very basis of Indian Philosophy is Vedanta. Different interpretations of Vedanta lead to different kinds of philosophies. Hence these aphorisms too are interpreted in different ways.

Mahavakyas and Sub-schools of Vedanta

Bondage is the reason for the miseries of the world. Ignorance is the cause of bondage. Liberation is the absence of Ignorance. Wisdom alone is the cause of Liberation. Jnanam Eva Moksha Karanam. Then, How one could attain wisdom? Advaita text Naishkarmya Siddhi replies ‘Vedanta Mahavakya Eva Jnanam’ which means ‘Vedanta aphorisms alone give wisdom’.

Sri Sankaracharya expounded the core concepts and tenets of Advaita Vedanta mostly based on these four aphorisms.

The views of Sri Madvacharaya of Dvaita sub-school of philosophy differs from Sri Adi Sankara and Sri Ramanuja. Let me explain the common aspects first.

Sri Adi Sankara gives more importance to these aphorisms than the others. The other sub-schools repudiates mainly the Advaita sub-school to establish their philosophy and gives an interpretation in such a way to suit their philosophies.

However, we should understand the basic commonality among them. Though they had an entirely different view from one another, they accept the supremacy and authority of Vedas and Vedanta. Only their interpretations are different.

The four aphorisms give perfect answers to the following basic questions of the spiritual seeker.

What is his nature?

What is the nature of my soul?

How to attain Liberation?

The four aphorisms are also used in Mantra Japa by some seekers. While taking these mantras for Japa, one should contemplate on the meaning of them during practice, like chanting Pranava Mantra Japa with contemplation on its meaning.

It is also a notable point that Tat Tvam Asi is repeated nine times in Chandogya Upanishad.

For example, consider the sentence: Rama is the King. The king and Rama are the same entities. The two words refer to one entity. Consider this sentence: The Rope is the snake. It means the snake you are seeing is the rope. Here, we exclude the word snake. But in the former sentence, we include the second word.

In addition to the four Maha-Vakyas, some other Maha-Vakyas are found in Vedanta. Let me explain some of them.

Sarvam means ‘all’. Kalvidam means ‘indeed this’. Hence this Maha-Vakya means ‘All this indeed Brahman’. This aphorism appears in Chandogya Upanishad.

All this is indeed Brahman. From this, the universe comes from, exists, and dissolves. A man is identified with his will. According to his will in this world, he verily becomes that will after leaving this world. Hence let him cultivate his will.

According to Advaita Philosophy, the world is a delusion. It is there but the reality is different from its appearance. Hence Sruti calls its Brahman. This verse of Chandogya Upanishad is the Sruti Pramana (testimony of the Vedic Scripture) for the Advaita Philosophy which calls this world as Mythya or delusion.

Ekam means one. Eva means alone. Advitiam means without a second. Hence this MahaVakya means ‘This is the one alone without a second’. It was found in 6.2.1 of Chandogya Upanishad.

Hence a true seeker interprets the Mahavakyas in accordance with the path he has chosen. It is just his commitment to his path. The different interpretations should be understood in this spirit. 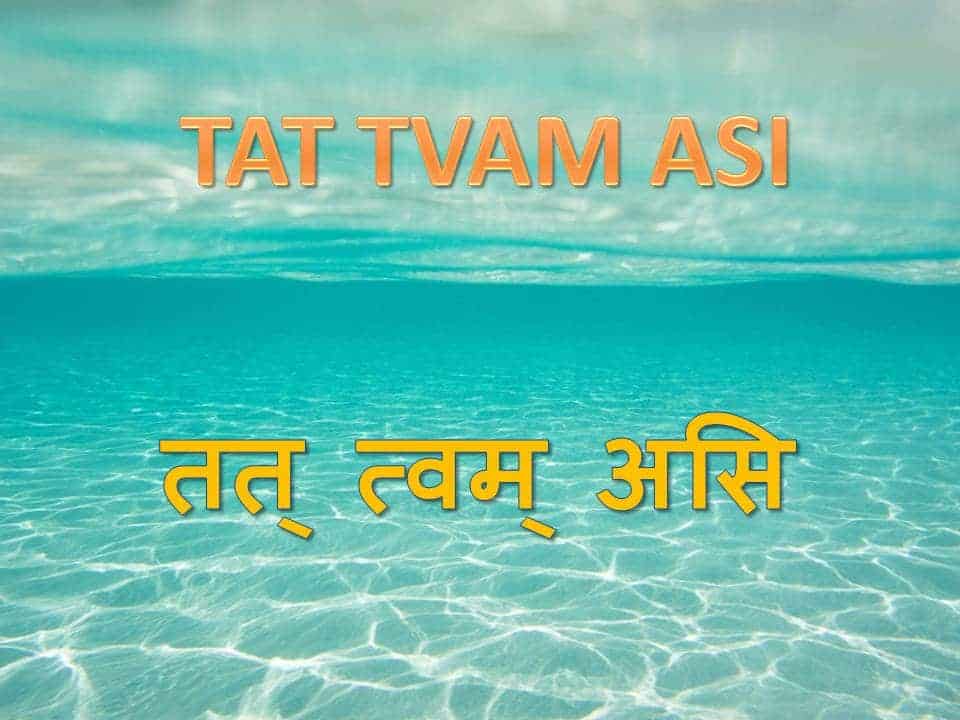