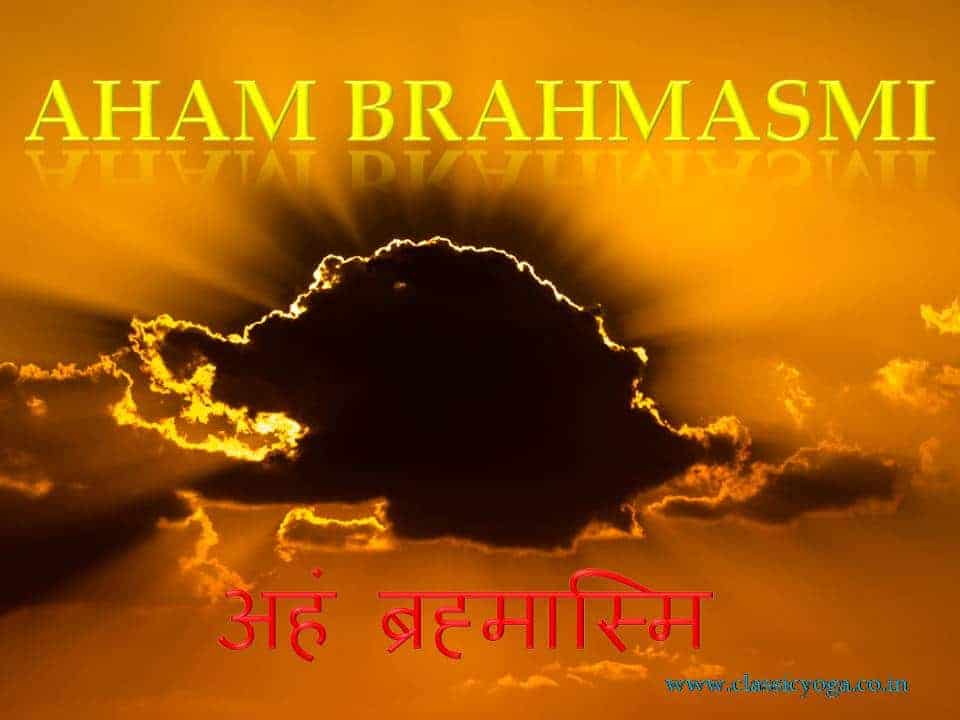 Aham Brahmasmi: I am the absolute reality

Aham Brahmasmi is the core philosophy of Advaita Vedanta expressed in a simple phrase. Because of its brevity in expression and vastness in meaning, it is termed as Mahavakya. Self is not limited to the mind, or body, it personifies the whole limitless universe. Its realization is the ultimate goal, the very aim of the spiritual path of Vedanta.

This article sheds light on its meaning, definition, and diferent views on it, which will provide the reader with the conceptual basis upon which she/he may proceed for deeper understanding and insights of Vedanta.

Aham denotes the word “I”. Brahmasmi is a combination of Brahman and Asmi. Brahman is the supreme reality of existence. Asmi equals “am”. Hence the meaning of this Mahavakya in English is I am Brahman.

The word Brahman has more than one meaning. One of those meanings indicates a person belongs to the caste of the Brahmin community.

Another meaning of the word Brahman indicates the deity of creation who is one of the three deities of creation, sustenance, and dissolution of the universe.

Yet another meaning of the word is the ultimate reality of existence.

Though multiple meanings existed for the word, the meaning used in this great sentence is “ultimate reality of existence.”

The following quote from Taittiriya Upanishad gives a definition of the word Brahman.

That from whence these beings are born, that by which, when born, they live, that into which they enter at their death, try to know that; That is Brahman.

What is Aham Brahmasmi Contextually?

I am the absolute reality is one of the Mahavakyas of Vedanta.

Mahavakyas are the concise expression of the core tenets of Vedanta that may be understood as the great aphorisms of Vedanta. The one commonality of these statements is they are Identity Statements.

The four Mahavakyas are

According to Guru Gita, Prajnanam Brahma in Sanskrit is Upadesa Vakya or a statement of instruction.

Aham Brahmasmi is Anubhava Vakya or statement of experience.

Hence we should understand the meaning of Mahavakyas in this context.

The statement has come out from experience. Hence it should be realized only through experience, not by lecture, explanation, or guidance.

The first occurrence of the Mahavakya is found in Brihadaranyaka Upanishad 1.4.10. It reads:-

This self was indeed Brahman in the beginning. It knew itself only as “I am Absolute Reality.” Therefore it became all. And whoever among the gods had this enlightenment, also became That Brahman.

It is the same with the seers (rishis), the same with men. The seer Vamadeva, having realized this Self is That, came to know: “I was Manu and the sun.”

And to this day, whoever in a like manner knows the Self as I am the Absolute Reality of Existence becomes all this universe. Even the Gods cannot prevent his becoming this, for he has become their Self.

Advaita means non-duality. It is one of the philosophies of Vedanta which describes the oneness of the reality of the existence: Brahman that is eternal, formless, and beyond delusion.

According to Advaita philosophy, only Brahman is real, the world is a delusion. Atman is Brahman only. This is the core concept of Advaita Vedanta.

Brahman is real. The world is a delusion. Atman is nothing but Brahman.  It is the perfect philosophy as declared by the Vedanta. –Brahma Jnanavali Mala, Adi Sankara.

Advaita in Vedas and Upanishads

The first line of the above verse is the quote from Niralamba Upanishad.

They called him Indra, Mitra, Varuna, Agni and he is the heavenly bird of beautiful wings.

The truth is one. The sages call it by many names and describe it in many ways, hence they call  it Agni, Yama and Matraisvan.

Advaita and three planes of existence

Advaita Philosophy states that there are three planes of existence. They are

Except for the plane of transcendental existence, the other two planes are the outcomes of Maya or delusion.

If ignorance or Avidya is cleared, these two planes of existence cease to exist and the absolute existence prevails.

I am the body, I am the mind, or I am Atman (except when the oneness of Atman is realized) are the functions of delusion.

I am the pure consciousness or I am indeed Brahman is the reality. The conceptual understanding that I am Brahman does not serve the purpose.

The realization happens only in the complete absence of Maya.   That is why it is often reminded not to be understood as Upadesa Vakya.

The seeker should meditate and realize by rejecting as ” I am not this, I am not this”. When the snares of Maya have been cut-off completely, he realizes the oneness of reality.

Inference and testimony could not lead to the plane of transcendence or absolute reality, because they are in the lower planes.

In Vivekachudamani, Adi Sankara provides the steps for realization. By merely repeating the words “I am the emperor”, one cannot become an emperor.   To become an emperor, the enemies should be destroyed.

Likewise by merely repeating the words “I am Brahman”, the oneness of Brahman is not realized.   He should destroy the illusion and avidya by discriminating between the real and unreal.

The first step is the complete detachment from impermanent things. Then one should follow calmness, self-control, perseverance, and renunciation of selfish activities.

Then he should learn and follow what he has studied.    As the last step, he should go for a long-lasting constant meditation on truth. In this very life, he will realize.

Three states of existence and the four states of Self

Like three levels of existence, Vedanta postulates three states of existence. Jagrat, Svapna, and Susupti. They are the states of waking, dreaming, and deep-sleep respectively.

Yet another state is Turiya meaning the fourth one. The fourth one is not a state beyond the three states. The experiences of the other states are reflected there.

The experiences like I have had good sleep, It was a bad dream and the like, are happening in that state. Hence it is the sub-stratum of the three states and is present in all three states.

Hence Self has four aspects. Vaisvanara, Taijasa, Prajna, and Turya. Vaisvanara is the experiencer of gross objects.

Turya is the absolute experiencer, the Supreme Atman.

The oneness of Self and  Ultimate Reality

In Advaita, Aham Brahma Asmi is Jiva-Brahma-Ikya-Anubhava. Simply put, it is the experience of the oneness of Atman and Brahman.

Vishishtadvaita does not give much importance to this Mahavakya, as it is given in Advaita.

Vishishtadvaita means qualified Advaita. According to Vishishtadvaita, Brahman is one. Souls are many and equal. God and souls are inseparable.

On liberation, the soul realizes God and does not become God. Sri Ramanuja propounded this philosophy.   He declares Brahman is Lord Vishnu. Sri Ramanuja does not comment upon this Mahavakya.

In Dvaita philosophy, God is different from Atman. Worship is the medium to attain salvation. God is one and He is Vishnu. Souls are many and are not equal. When liberated, Atman gets some qualities of God, but still inferior.

Here is the quotes of Aham Brahmasmi by Sri Madhvacharya.

On the other hand, Aham means Aheyam “that which cannot be neglected, cannot be avoided”; similarly the word Brahma means “all-full”.

Asmi does not mean “I am” but it is a compound of two words “As” meaning existence and “Mi” meaning knowable.

The interpretation by Madhvacharya in his commentary on verse 1.4.10 of Brihadaranyaka

Chapter 28 of Ribhu Gita gives a detailed explanation of the four Mahavakyas.

Ribhu Gita states that the word Aham denotes Atman, Brahman indicates God and the endless identity between the two is Asmi.

The intellectual inquiry of this Mahavakya and the experience that results from that inquiry gives the state of the realization of the proclamation.

He who makes the inquiry with the firm conviction of ‘I am Brahman’ surely destroys the distortions of the mind forever.

Having established the meaning of the statement of oneness in the mind without any contradiction, one casts off all the impressions and experiences of the past.

The third chapter of Tejo Bindu Upanishad gives a technique of meditation of ‘I am indeed Brahman’. It also describes the benefits of chanting ‘I am Brahman’ as a mantra. This mantra alone is enough, says the Upanishad, to attain liberation.